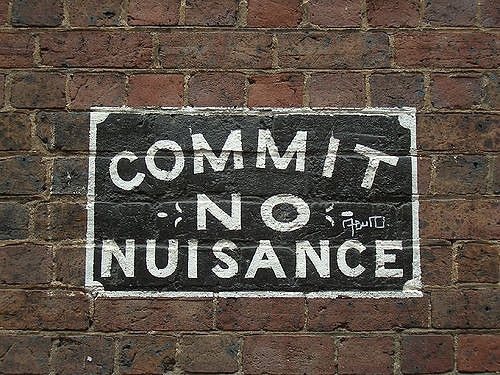 Condominium associations offer their residents many perks not found in neighborhoods with single family homes, including shared maintenance expenses and various amenities. However, the close proximity of neighbors to one another often leads to issues when one owner’s conduct interferes with another’s enjoyment of their space. Behavioral issues and nuisance conduct are some of the most common complaints Boards of Directors must manage. To properly handle these issues it is important to understand what constitutes a nuisance, and what options are available to remedy the situation.

Though owners may be disturbed by another’s conduct, whether or not such conduct rises to a legal nuisance is another question. Everyday activities such as talking on the phone, walking inside a unit, and having guests are examples of activities that may annoy fellow owners, but are not typically sufficient to find a nuisance. On the other hand, behavior that is likely to cause harm the health of the community, endanger it, or cause disturbances beyond what is considered usual behavior will not be tolerated. Examples of nuisance behavior include playing loud music at unreasonable hours, piling trash in common areas or outside the units, failure to clean up pet-waste, and verbal harassment of the residents.

For conduct to rise to the level of a legal nuisance, the activity must be ongoing and substantially and unreasonably disturb others. “Anything which annoys or disturbs one in the free use, possession, or enjoyment of his property or which renders its ordinary use or occupation physically uncomfortable may become a nuisance and may be restrained.” Knowles v. Central Allapattae Properties, Inc., 145 Fla. 123, 130 (1940) (quoting Mercer v. Keynton, 121 Fla. 87 (1935)). As one court put it, “[i]nherent in the condominium concept is the principle that to promote the health, happiness, and peace of mind of the majority of the unit owners since they are living in such close proximity and using facilities in common, each unit owner must give up a certain degree of freedom of choice which he might otherwise enjoy in separate, privately owned property.” Hidden Harbour Estates, Inc. v. Norman, 309 So. 2d 180, 181-82 (Fla. 4th DCA 1975). Further, “relief will be granted where associations show they are substantially and unreasonably disturbed notwithstanding proof that others living in the vicinity are not annoyed.” Rae v. Flynn, 690 So. 2d 1341, 1343 (Fla. 3d DCA 1997).

To avoid the possibility a court may not find conduct sufficient to establish a legal nuisance, associations are best served by amending their documents to define nuisance behavior, or creating rules prohibiting certain conduct. Examples may include specifying areas where one may smoke, limiting noises during certain hours, requiring pets are cleaned up after and walked with a leash, prohibiting trash from being left in the hallways and common areas, etc. The less reliant an association is on the generic catch all phrase “nuisance,” the more likely it will succeed should legal action be necessary to enforce its rules.

Once a condominium association’s governing documents are sufficiently specific as to what constitutes a nuisance, the association can explore its enforcement options. The Condominium Act requires associations engage in non-binding arbitration overseen by the Division of Condominiums, Timeshares, and Mobile Homes (DBPR) to resolve “disputes,” which covers the vast majority of governing document violations an association will face. Arbitration is a quasi-judicial mechanism whereby an arbitrator will decide if the behavior rises to the level of a nuisance, or if restrictions were violated. The prevailing party in an arbitration is awarded attorneys’ fees and costs. If a violation persists following arbitration, the association may sue to enforce the arbitrator’s decision and seek an injunction.

At Tankel Law Group, we have vast experience assisting clients with putting an end to nuisance behavior in their communities. Whether your association’s governing documents require new rules or amendments, or arbitration and litigation are necessary, we possess the expertise to bring quiet back to your residents.